The American “Main Street” festival is one of the great cultural staples of the United States.  It doesn’t matter if you are the smallest town or one of the largest, just about every town, city, county, and region holds an annual festival to celebrate what makes them unique.  These are excellent occasions for the community to come together and enjoy great food, art, crafts, and usually music or some form of entertainment.  Most festivals in America will have at least one stage that may host local talent, like the high school band or some type of a talent show. If the festival has been around for awhile, the offering may be bigger drawing talent from local, regional, or even national acts.  The stage is the glue that holds the festival together.  It is usually where the festival starts and ends.  Since the stage incorporates sound it is typically where you make all of your announcements, thank your sponsors, and tell people about upcoming events in the city.  We have all been there and we know the stage is where it’s at!

Think about the last time you were at a festival when they made announcements.  The job of the announcements usually falls onto someone who is 1) Inexperienced in public speaking 2) Has no experience using a microphone, 3) Unprepared for the job (sometimes they find out the day of the event!), and/or 4) they have a boring voice.  This obviously isn’t always the case but we have seen this all too often at many festivals (obviously the large mega-festivals that bring in talent and professional emcees don’t count!).  It is so unfortunate when announcements can’t be heard or understood because good communication is the key to getting the message across!  This is the moment you are interfacing with the public to thank your sponsors, inform them about the days events, and let them know about future happenings.  Nailing all three of these things is very beneficial to the captive audience!  Coming up short on announcement is not only a missed opportunity but can also be damaging.  It certainly doesn’t give your sponsor a compelling reason to support you with future events.  Luckily there is a better way that is both cost effective and will absolutely knock it out of the park every time!

Our suggestion for success at your next festival, music on main, or community event is very simple:

That is it!  The magic sauce is just three simple steps.  Of course we are here to help you with your messages and we hope that you will use our services, but if you have someone on staff with a good voice and the equipment to get this done on your own, make it happen!  This will make a huge difference and have a noticeable impact on your festival.  Your audience will thank you and most importantly, your sponsors will thank you.  They will also be more likely to sponsor your event again next year!

The Proof is in the Pudding…

The advise mentioned above is not just a mere opinion, it is something that we have implemented and have feedback on the results. If you have read about us and looked into some of the information on our site then you know we come from an entertainment background with a significant amount of festival experience.  Ryan, specifically, has worked with a number of festivals in the North and South Carolina region as both a professional musician and owner of a sound and lighting company.  This is essentially where the entire idea for Only Voice Overs got started.  It was through our combined experiences and observations at a number of productions and events that we saw the need for a voice over function at live events.  Probably our best example of this would be the city of Wilkesboro, North Carolina.

Wilkesboro, NC is an amazing town that is rich in Blue Ridge heritage, culture, music, and natural beauty.  It is not a small town but then it isn’t a big town either; it is sized just right.  Like most places in North Carolina the people are genuinely friendly.  Wilkesboro is also one of those towns that “gets it” when it comes to live entertainment, festivals, and community events.  They do a lot of it and they do it well, very well!  Our dealings in Wilkesboro started back in 2013 when Ryan was playing guitar in a tribute band that was booked to perform at their Open Air Market.  The gig was like most other gigs and went off without a hitch.  The open air market was somewhat new for the city and Ryan couldn’t help but notice that improving the sound production would have a great impact on the event.  When asked to perform again the following year he offered up his sound company to provide a solid sound solution for the event.  The town loved the idea and booked sound for the entire season (and every season since then!).  The events have continued to grow and improve each year and what started as a simple afternoon concert from a gazebo in the corner of an open air market, has grown into a major production on one of the areas premier outdoor concert stages: 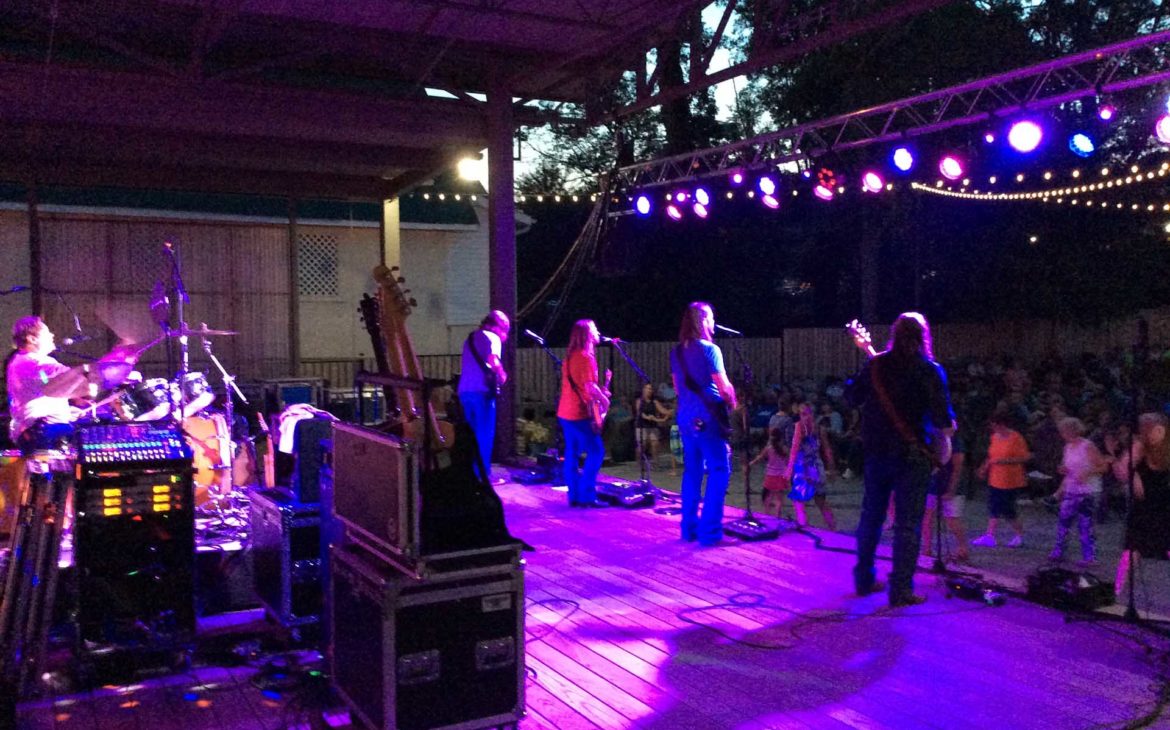 Not to get off on a tangent, but the concerts at Wilkesboro are phenomenal!  We highly recommend you check them out! Ryan still provides sound and lighting services for all the Concerts in the Commons events and whenever they need his sound company throughout the year.

Like most (if not all) live events, the events at Wilkesboro always had announcements that needed to be made and we always ran into the same problems we described above.  If we were lucky, Terri (the one with the voice) would be present and we could get her to make the announcements.  However, most of the time, announcements would fall to someone from the town who would give it their best shot (or to Ryan if nobody else could do it) but any of those choices were not optimal because they were missing the professional delivery required to get the message across to the crowd.  It also created the follow challenges:

Ryan saw an opportunity to improve this part of the event and one year asked the town if we could have all of the announcements the week before the event in order to prerecord everything.  The town was onboard and helped coordinate getting us all announcement material up front.  Everything was broken down into small micro announcements like we suggested above.  Here are examples of what we provided one year for the Town of Wilkesboro:

All five of these announcement have a raw recording cost of about $225.  Also note that these are produced samples with background music added which is an add on service we provide. Of course, this is something that could be done by the customer after we provide the raw voice-over file.  It is also important to note that for this event, many of the recordings were applicable throughout the entire season and didn’t need to be rerecorded each month.  Since we put no limitation on any of the voice-overs we provide you have no restrictions on use, reuse, audience size, or anything of that nature having to do with licensing.

As for the implementation of these messages, they were played throughout the event when there wasn’t a band performing.  They were on a rotation to be played after every 2nd song during the pre-show music and after every song during the 30 minute intermission between acts.  Each message was played approximately 10-12 times each night.  The voice-overs were very well received by all in attendance including the town, vendors at the hospitality tent, and the sponsors.   The town planning and community development director even stated the following:

The prerecorded announcements work perfect for us and our events in Historic Downtown Wilkesboro! It’s easier for our team logistically, it’s more clear and consistent, and does a better job of delivering a well thought-out message.

It was a resounding success and has since become the standard at each concert event!

After our experience at Wilkesboro, Ryan has implemented the same format at a number of other festivals and events where he also provides sound and lighting services.  It is always well received and becomes an included/expected service each subsequent year.

Only Voice Overs has the experience and talent to provide prerecorded announcements for your next festival, music on main, or community event.   Check out our talent and place your order today!